I’m not just about my hair and nails, but if I take the time to look nice in the morning, I don’t want my efforts wasted by headsets (or any tech equipment) that I need to use everyday to perform my job.

As a woman in a development role, I’ve gotten used to the fact that I’m probably going to be the only woman within my team (and maybe the office depending on the size of the company). But to be honest, I don’t even notice things like this anymore, except when I’m actually using tech.

I enjoy the fact that I have an active role in the development and also the quality of the product that we deliver. I wholeheartedly believe that we need more females in development roles because we do think differently. And these differences will be reflected in the products that we eventually turn out.

So when I come across new innovations in tech that don’t seem to be designed with the other 50% of society in mind, it makes me slightly annoyed and disappointed.

We all know how important it is to ensure that your end user gets their hands on your product before you release, because if they only get it once it’s mass produced, it’s extremely expensive to recall and fix the problems or to teach the users how to use it. 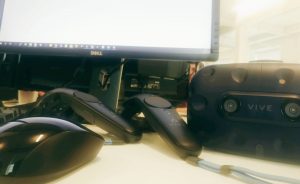 When HTC released the Vive Pro, we were lucky enough to get hold of a first version of the upgrade. And I wondered, having used the Vive Pro and the original for about year, does HTC even test these devices with a wide range of women?

With the high price point of these devices.you would expect it to be of a pristine quality and suitable for everyone, male and female who wanted to use it.

Now don’t get me wrong, out of the all the VR devices I’ve used in the last 18 months, the Vive Pro is actually one of my favourites. Plus being one of the first companies to produce a high end VR device must be hard without prior tech to build and extend. So I say this in the hopes that HTC amend they’re testing and development workflows so that they can gain more loyal customers.

Challenge 1: It doesn’t play well with my natural hair

With the first released version of the Vive, yes it’s heavy especially if you wear it as much as I do on a daily basis, but it’s comfortable. Except for when you want to take it off. The velcro on the headset is constantly catching my hair ripping out hard-earned growth. Then we come to the fact of what my hair actually looks like after removing this headset. Let’s just say if I tried to fix my hair after every time I took the Vive off, I’d probably lose an hour of work a day!

To get around this problem, I’ve resorted to either having to wear specific hairstyles that won’t need to be redone after constantly putting on and removing the headset or just give up and deal with the fact that I won’t have a tidy head of hair on my head throughout the day.

Challenge 2: Gives me a slight pain in the head

Now with this new and “improved” headset, although it’s supposed to be lighter, I’ve found that after about ten seconds I get a pain on the side of my head. This may be because I have a weird shaped head, or a small head but when I put the headset on, I adjusted to what I thought was suitable so that I could work. And this caused me pain. Should I need to be told the best way to put on a headset or should it be intuitive? The latter right? But, this is my job, so I’m going to have to figure out why the headset doesn’t like my head.

Note: After using the Pro everyday as my sole dwarfing device for VR, I don’t get this pain anymore. I’m not sure if my head’s gotten used to the weight or I’ve found a better fit, but I’m happy this is no longer a problem. 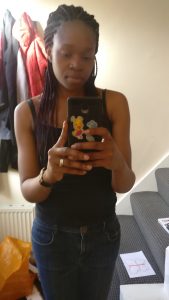 So as I’ve just been to Italy, I didn’t want to have to do my hair in 35°C+ heat everyday for two weeks, so the week before I got braids put in (the stickers on the back of my phone are the latest additions by my three year old daughter).

This was supposed to make life easier for me on holiday, but it didn’t at work. I don’t put my hair on any style extravagant, just up in a ponytail to keep it out of my face. But when I first tried to put the Vive Pro on I found that this wasn’t going to happen in my current style. So in order for me to test, I have to remove my hair band and put it back in when I’m finished every time. Needless to say this slows down work, but luckily it’s only temporary. But again, I’m reminded of the fact that this probably want accounted for during the design phase. I suppose the ”workaround” of taking my hair band out works, but should I have to use it this way? In 2015, 15 percent of males versus 8 percent of females had tried VR devices so to cater to the majority of users makes sense, but only at the expense of crafting a further barrier to entry for females.

I’ve switched projects now and I’m using a Samsung Odyssey for testing. Overall, the device is nicely designed and light compared to other VR alternatives I have tried. And, I haven’t had the pain in my head when I first tried it like with the Pro so I’m happy about that. But, I still have the issue with my hair 🙁 I don’t think this is going to be a problem that’s solved anytime soon unfortunately. But I’d love to know the following things from HTC and Samsung to help me understand how they got to these design decisions:

Surely, I can’t be the only one that had these hairy (see what I did there?) issues? Maybe these issues were raised and were deemed minor or not a bug? I don’t know, which is why I need answers!

It sounds like I’m asking a lot, but for a global company like HTC and Samsung to roll out a product, you’d expect that they’d cater for the global audience. I mean, if a woman in her 70s wanted to start using her child’s or grandchild’s VR kit, why should there be a barrier for her?

I’ve used a few VR devices and they all have some accessibility issues. Making these products usable and comfortable for all users will increase the market reach, increase loyalty to the product (and possibly the brand) which would increase sales. So, why not invest more time into testing with a wide range of users to build out products that appeal to more customers?

Please consider this HTC, Oculus and Samsung. My hair and head would very much appreciate it.